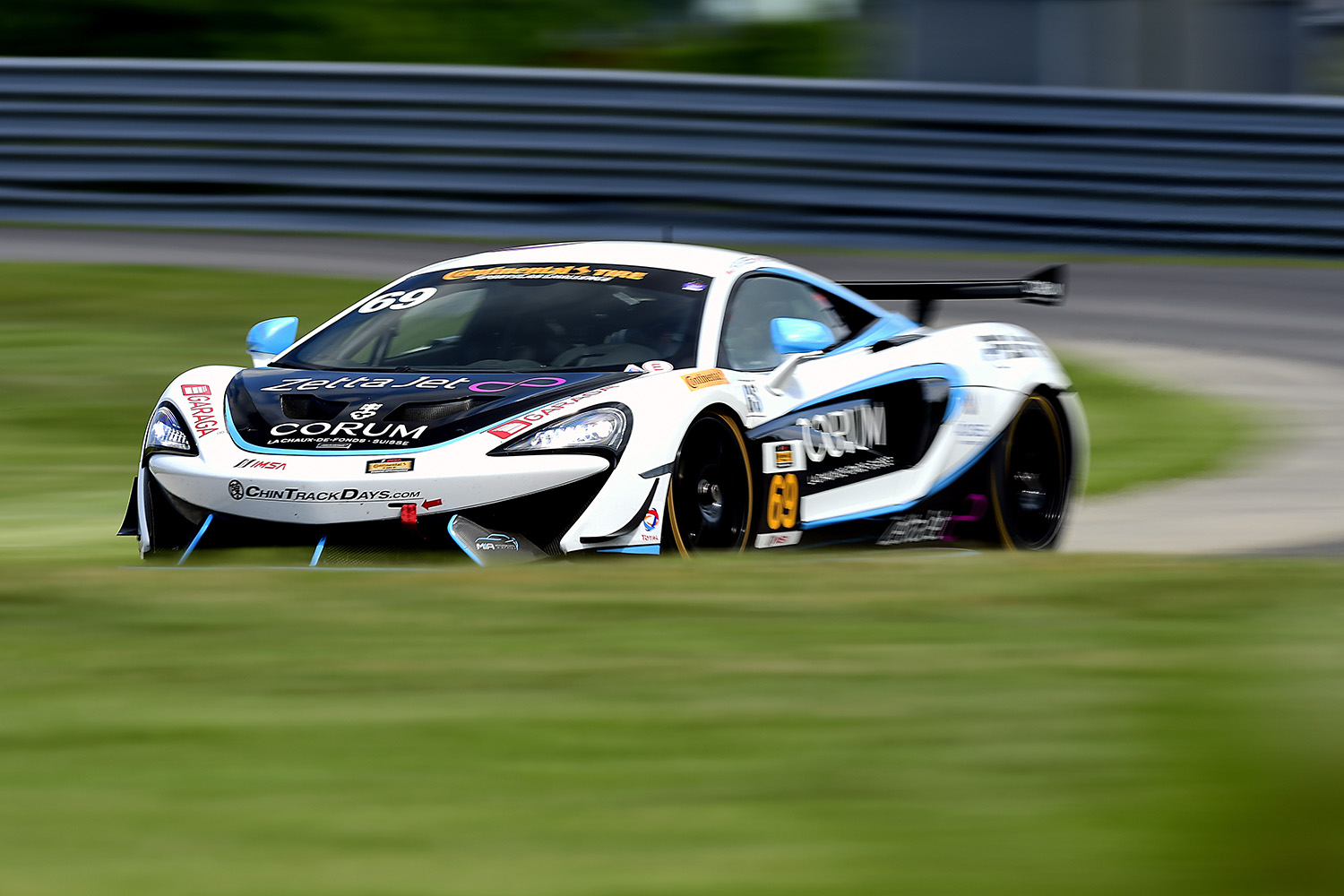 July 22, 2017.-Montreal drivers Jesse Lazare and Chris Green shined this afternoon on the track at Connecticut’s Lime Rock circuit, finishing in fourth in North America’s Endurance series, the IMSA Continental Tire Sportscar Challenge. At the wheel of theirMotorsports in Action (MIA) McLaren 570S GT4, Lazare and Green had to fight from the beginning to the end of the two hour race, but their final result once again illustrates the high level of competition.

At the small Lime Rock track, a tight schedule was laid out for the series competitors. During the practice sessions, the team tried more agressive settings, which were not to the drivers’ satisfaction once they were on the track. These changes were to deal issues pertaining to the steering wheel and traction control, however, a lack of sufficient time between sessions made it impossible to completely change these settings again ahead of the qualifying session. Chris Green still managed to record the sixth fastest time in the #69 MIA McLaren.
Taking the start of the race, Chris Green quickly climbed three spots but he fell victim to an incident that then lost him no less than nineteen positions, putting him in twenty-second spot. The Montreal driver put forth a fantastic comeback as he clawed his way back to the Top 5 just prior to the midway point of the race, as he turned over the wheel to teammate Jesse Lazare.
Following a well-executed pit stop by the mechanics and the MIA team, Lazare took to the track and continued his progression but just subsequent to moving into third spot, he encountered mechanical problems. Prior to finishing the race with an engine that only had 7 working cylinders, Lazare toughed it out as best he could, only losing one position before crossing the finish line.
Nevertheless, the overall result is excellent for the MIA team from this, the sixth race of the 2017 season and the drivers and the entire team once again proved their speed. Team owner, Eric Kerub, explained : « so much had happened in this race that to finish fourth is an excellent result. The incident and the mechanical problem during the race definitely cost us another podium but the two drivers were really remarkable in getting us this result. I’m proud of their work, as I am of the entire team. We’re new to the series and yet consistently in the front pack
» he confided.
For a second consecutive race, the MIA team has lent their other McLaren to C360R. In the hands of Matt Keegan and Nicolas Rondet, the #68 finished in ninth spot overall.
The next round for the MIA team in the IMSA Continental Tire Sportscar Challenge will take place on August 4th and 5th, in Wisconsin, at the Road America circuit in Elkhart Lake. There, the Quebec team, based at the Autodrome St-Eustache, will attempt to claim their first victory.