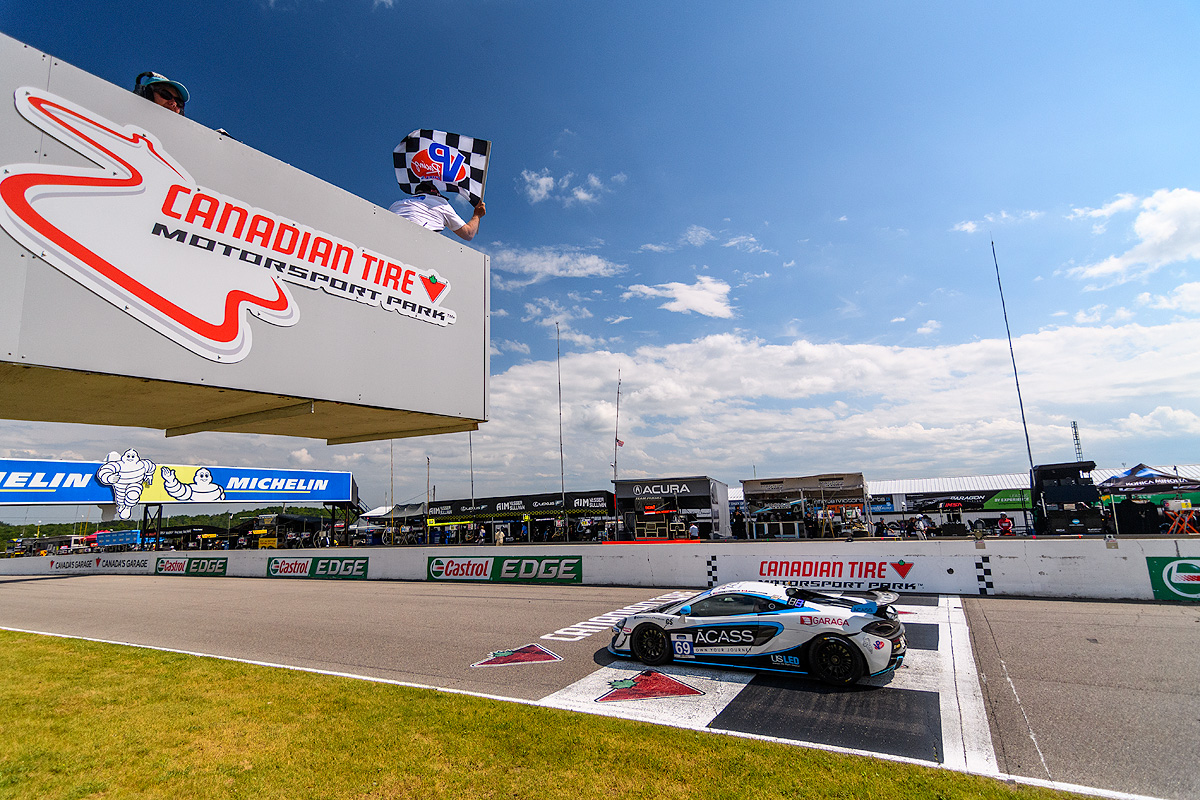 Bowmanville, July 7 2019 – Motorsports In Action claimed its third podium in 5 races marking the half way point of the IMSA Michelin Pilot Challenge 2019 season. After a difficult 4-hour race at Watkins Glen at the end of June, the team is back in the championship run, with only 2 points separating them from the GS class leader.

MIA entered the weekend in 3rdposition in the Championship with 3 and 7 points behind the respective leaders. The car showed promise from the beginning of the promoter’s test day leading right up to qualifying. However, qualifying on Saturday morning saw a noticeable shift in weather that did not agree with the car and setup which caused Corey Fergus to only secure a 7thplace for the starting grid – not representative of his previous pace in the car.

At the green flag of the 2 hour race however, the American was on a mission to negate a missed opportunity now that the weather was representative of what MIA had worked with in testing and practice. Once he settled into his groove, Corey made great passes putting MIA’s McLaren 570S GT4 in 3rdplace before handing over driving duties under a full course yellow to Canadian Jesse Lazare with an hour and 20 minutes remaining in the race. MIA’s exceptional pit crew then awarded the team another  2 spots which put the car in first place exiting the pits.

Jesse managed to stay in the lead for 23 laps of his stint with tremendous pressure of 5 competitors right behind him jockeying for an opportunity to get past. MIA pitted Jesse on lap 52 for full fuel and tires to make it to the end of the race under green flag conditions. After rejoining the field in 5thplace as others had pitted earlier and got track position over MIA’s McLaren, it was clear at least for the leader’s case that they gambled with a very early pit stop that would not have seen them to the end of the race without another safety car full course yellow, while the others simply had better fuel burn than MIA’s McLaren.

Jesse was making his way up to the leader while passing one of MIA’s championship standing competitors but with only a few laps minutes remaining in the race, luck presented itself to the race leader as a crippled TCR car, only meters away from getting himself completely off the track in a safe zone, triggered a safety car call from the officials. At the restart, Jesse passed the other competitor ahead of the team in the championship standings but could not get close enough to the 2 competitors fighting for the lead before the checkered flag.

Motorsports In Action is still third in the standings, but now with only two points separating them from the lead. The next event will be at Lime Rock Park on July 20.

Eric Kerub, team owner: “What an incredible day for the team at CTMP! On the drive down from Montreal on Wednesday, Jesse and I spent a considerable amount of time discussing the upcoming race and what we needed to do to close the gap in the championship. Outside of a win, this was the best possible result and watching him pass our 2 leading competitors on track gave us the confidence we can fight to the end. With now only 2 points separating us from the lead and several teams only a win away from joining the fight at the top, I anticipate a fierce championship battle for the second half of the season”

Jesse Lazare, driver: “The race was fantastic Corey did an incredible job during his stint. We had trouble in qualifying so he started P8 but he gave me the car in P3 and the team did such a great pit stop that we came out in P1. We were leading the race for a good 35-40 minutes, but unfortunately our fuel tanks are not as big as everybody else, so we had to pit a little bit later. The team did a great job getting me back out quickly, putting new Michelin tires. We were really fast and ended up finishing P3, two points out from the championship lead so I am extremely happy to have done this in front of all the Canadian fans.”

Corey Fergus, driver: “It was a great day for points. We closed the gap to the championship leader. I had a lot of fun during my stint moving from 7thto 3rd. The crew did an amazing job in the pits and got us to the lead. Ultimately, we just didn’t have the pace to win, but Jesse did a great job securing a podium finish and did the best with what we had today.”