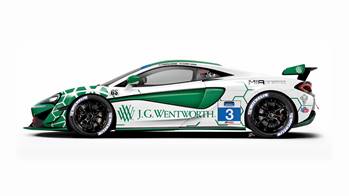 Québec-based Motorsports In Action (MIA) is back for a fourth consecutive year with an incredible opportunity to showcase up and coming driver Sheena Monk paired with multiple GT Champion and current Rolex 24H Daytona GTD Champion Corey Lewis!

Last year proved to be a pivotal season for MIA delivering their best performance in 3 years. A top 10 result in every round of the season including 4 podiums, the Michelin Pilot Contingency Award for Least Time in the Pits and VP Fuels Front Runner Award for Most Laps Lead culminated into Season Vice-Champions – missing the top step by only 12 points (272 – 260).

MIA’s willingness in waiting until the last minute to secure the same 2019 lineup almost ensured the 2020 season was not going to happen once it was clear too many pieces were missing. Team owner; Eric Kerub admitted “We really didn’t put ourselves out there as a racing team looking for drivers at the end of 2019. We focused too much on fielding the same lineup with ‘unfinished business’ in mind and when it didn’t happen, we had no Plan B.”

As luck would have it, MIA’s achievements over the past 3 years at IMSA did not go unnoticed by Monk who recently paired up with Lewis with a goal to compete in IMSA’s Michelin Pilot Challenge Championship. However, when it became known that MIA was available, the drivers had already contracted another team for the Daytona race.

“Sheena is coming from the Lamborghini Super Trofeo Series which has faster cars than the GT4 field in the Michelin Pilot Challenge”, observed Kerub. “yet it was clear from my conversations with her that she wanted to compete at the highest levels of GT racing in a series that is considered to have the most incredible pool of talented GT drivers”. It is with Monk’s determination to succeed and win along with sharing the car with an already proven champion that MIA made every effort to secure this pairing for the remainder of the season.

“We are so excited to make this announcement with such a competitive duo after thinking we were parked for 2020. The entire team is extremely thankful to Sheena and Corey for giving us this opportunity, and we don’t plan on letting them down!” concluded Kerub.

Sheena Monk: “I’m thankful for the opportunity to work with MIA because they have a proven record of success and their achievements as a team will help make the difference in this extremely competitive field.  I am also pleased to continue sharing the driving duties with Corey and learning from his experience.”

Corey Lewis: “Very much looking forward to joining MIA for the 2020 Michelin Pilot Challenge with Sheena in the McLaren 570S GT4!”

” We had a very strong test at Sebring, which I know we will be able to hit the ground running come race week! Sheena has shown strong progression with learning new circuits and has proven race pace! We plan to continue MIA’s success from last year!”

” Sebring has always been one of my favorite circuits on the schedule, I can’t wait to get to work!”