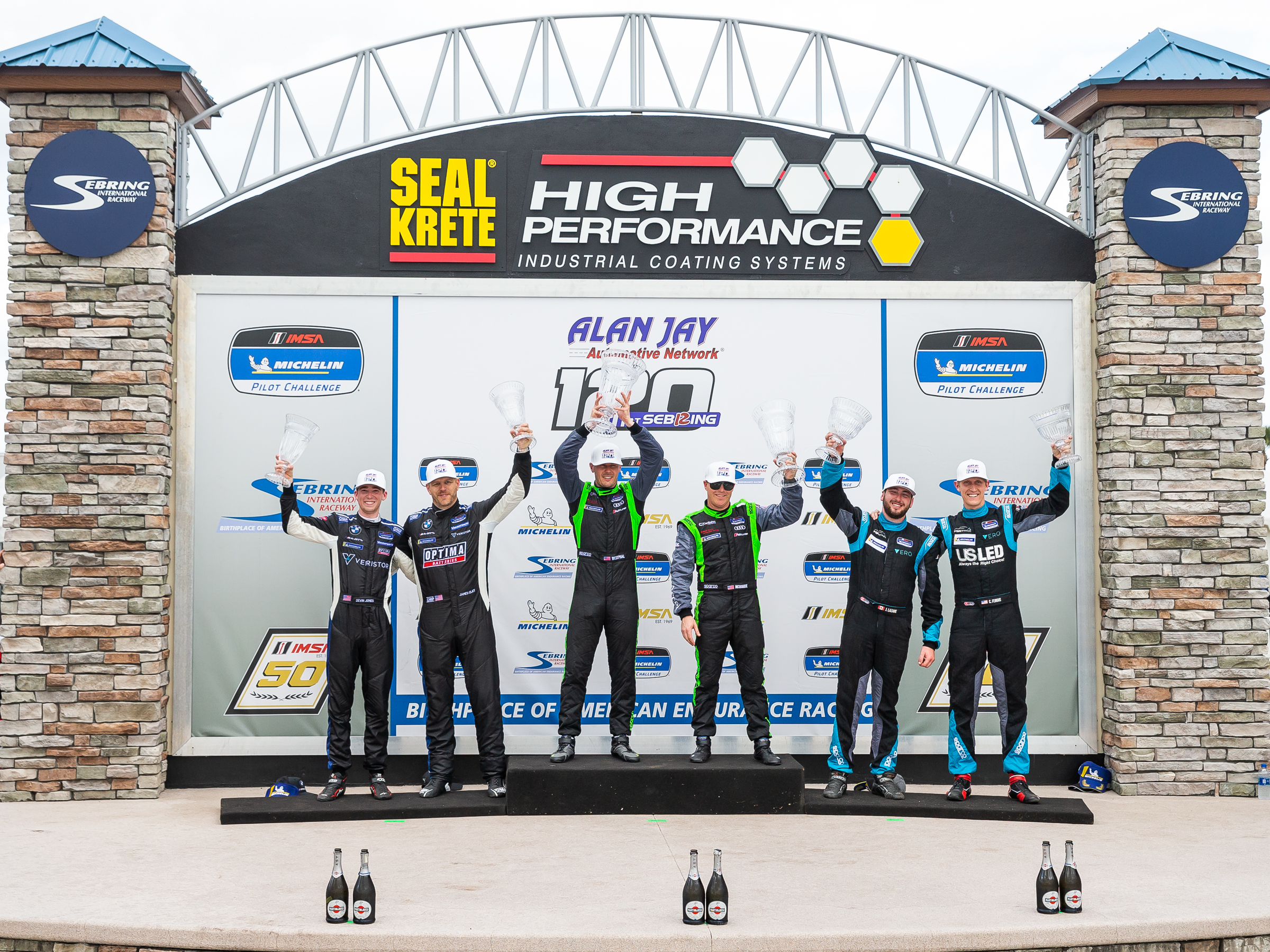 Sebring, March 16, 2019 – Motorsports In Action claimed another Top-3, this time at the historic Sebring International Raceway this past Friday during the Alan Jay 120 in the IMSA Michelin Pilot Challenge.

Corey Fergus, Columbus native, and Montréal’s Jesse Lazare co-drove the #69 McLaren 570S GT4 ACASS | US Led Ltd.| Jetcraft to the third place after an action-packed race. Corey Fergus qualified the car in 8th place on Thursday night, not able to clock in a better time due to a fault with a pressure manifold sensor.

Starting the race from the fourth row with the sensor replaced, the American driver lost no time in making his way up the field on board of his McLaren GT4. Passing car after car, Corey took advantage of a restart to gain momentum which ultimately put him in 4th place.

Fergus gave back the #69 machine to Jesse Lazare during a safety car period with a little over an hour remaining to this 2-hour endurance race. Jesse had a great stint, driving consistently and showing a promising pace. And gambling pit stop strategy from the Motorsports In Action crew had the car back in the pits for a fresh set of rear tires only during a caution flag to get track position and Jesse to the end.

The Canadian driver was back on the track in second place and challenged the Audi R8 of Carbahn Motorsports for the top spot until a brake issue along with quickly deteriorating front tires prevented MIA from claiming victory and now had to concentrate on making sure the car finished with the best possible result. This 2-hour endurance saw a thrilling end when BimmerWorld Racing’s BMW M4 passed Jesse, and Riley Motorsport’s Mercedes-AMG was attacking for a spot on the podium. In the end, Jesse kept his third position, thanks to his stellar drive. Motorsports In Action offered the thousands of fans around the track another great photo finish.

Motorsports In Action’s #69 McLaren 570s GT4 is now tied up with BimmerWorld Racing for the lead of the IMSA Michelin Pilot Championship in the Grand Sport class with 60 points.

Jesse Lazare, Driver: Corey did an outstanding job in his opening stint, giving me the car in good condition and in a great position. The team was absolutely flawless during the pit stops and gave me a solid car to finish in third place. I’m looking forward to our next race at Corey’s home track at Mid-Ohio to hopefully secure more points for the championship.

Corey Fergus, Driver: This third-place finish was a great way to continue the season and being tied-up for first place in the championship feels great compared to last year at this time. We were very smart about how we dealt with the race and scored valuable points ahead of Mid-Ohio. Jesse and I are in a good position.

Eric Kerub, Team Owner: We came in this weekend with mixed expectations. With an 110lbs added to the car from IMSA after our last race at Daytona, we knew we could still compete but had concerns about the end of the race. In the end, the extra weight played a significant role in the degradation of the tires and brakes which prevented us from going for the win. We are however extremely excited with a P3 while now tied for the Championship. Let’s keep this momentum!