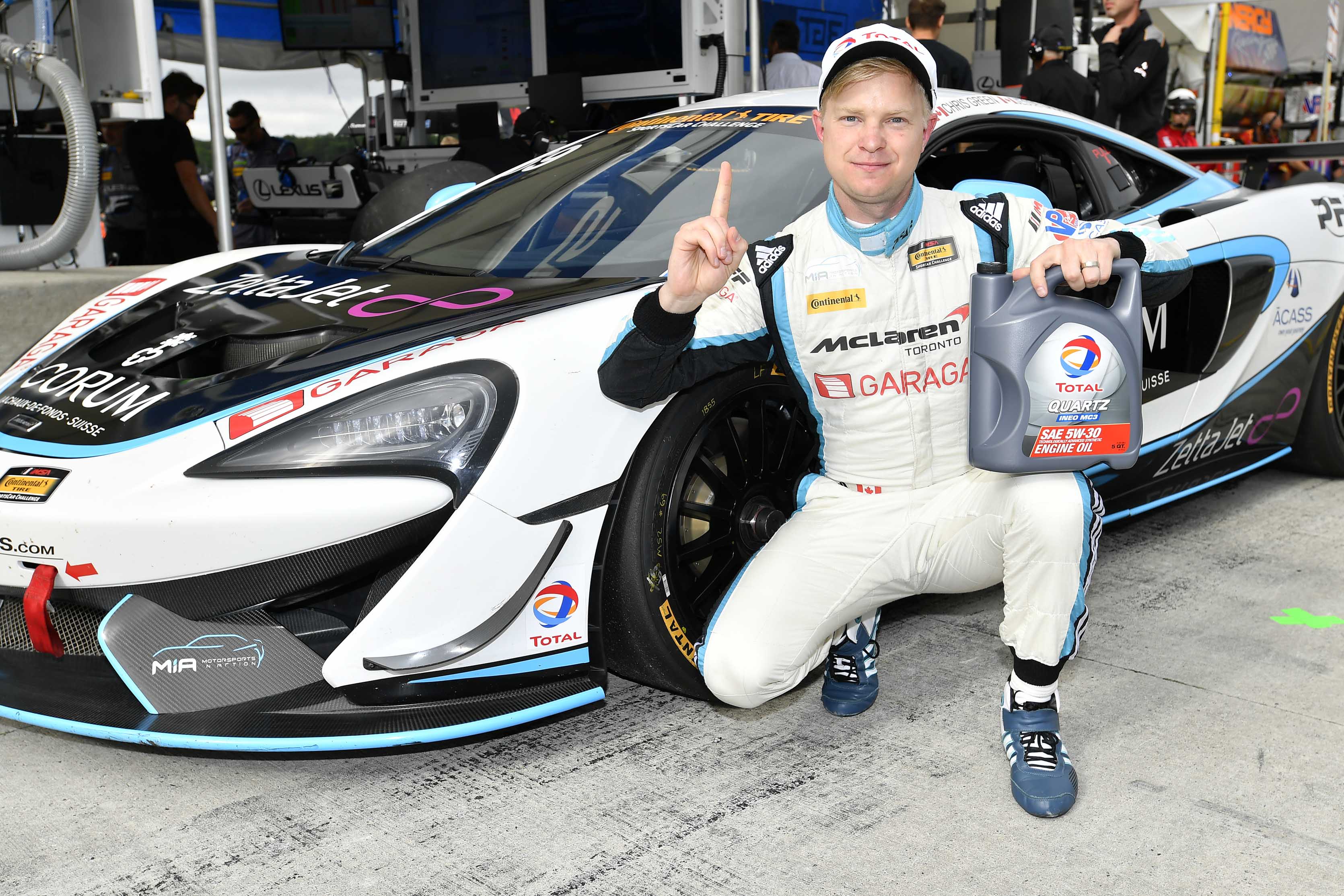 July 8, 2017.- The Motorsports In Action (MIA) team and its Montreal drivers Jesse Lazare and Chris Green were back on the track this weekend at Canadian Tire Motorsport Park, in Ontario, for the fifth round of the season in the North American Endurance IMSA Continental Tire SportsCar Challenge series. Consistently at the front, as much during the free practice, qualifying (where Chris Green earned the pole position), and during the race, the MIA team’s #69 McLaren 570S GT4 lead close to half of the event before finishing in third place.

This second podium of the season, after the one achieved on the Sebring track last March, rewarded the flawless work of the St-Eustache (Québec) based team, but does not completely reflect the performances of the two drivers, nor of the team in general. Indeed, after a perfect start, Chris Green maintained the lead for almost the entire first hour of the race, creating a gap of twenty seconds. Alas, a full-course yellow period following an incident with an ST Class car eliminated the margin that Green was successful in creating. Like all the competitors vying for the victory, the MIA team used this neutralization to make its pit stop and change drivers, with Jesse Lazare relieving Green for the second hour.

However, due to confusion with the regulations regarding procedures when a safety-car arrives on the track, the team was penalized, forcing Jesse to make a drive-through penalty when the race restarted. Dropping to fifth place, twenty second behind the leader, Lazare had a brilliant climb back up to find himself in second spot with ten minutes remaining. But, running very low on fuel, he needed to slow down during the last lap, thereby losing one position. It was eventually third place that the MIA earned at the only race of the season held in front of a Canadian crowd (all 9 other races in 2017 take place in the United States).

Astonishingly, it’s the second time in a row that the MIA team’s McLaren lead the battle but lost the race due to a penalty. A week earlier, on the Watkins Glen circuit (state of New York), Lazare and Green were in the first row before being relegated to tenth place (GS category) following a two-lap penalty that was provoked by confusion with the safety-car, that Lazare inadvertently passed during a neutralization.

For the owner of the team, Eric Kerub, the summary of these two events is quite positive with a pole position, a podium, and two race lap records earned by Jesse Lazare and Chris Green. With performances like these, the team’s first win is surely not very far off: “I believe that we once again showed that we have the best driver combination possible. We clearly demonstrated our capabilities at the front, as much at Watkins Glen as in Ontario ” explained Eric Kerub, who added: “the penalties we received following the confusion that took place between our drivers and the presence of the safety-car clearly cost us the victory but I take away the fact that, as rookies in the series, we did not make one error in our car preparation, nor our strategy, nor during the pit stops. We’re leaving Canadian Tire Motorsport Park with a podium, a lap record, and pole position, which is very good!”.

At Watkins Glen, the team had brought its #68 McLaren GT4, which was entrusted to Ontarian Kenny Wilden and American Rod Randall at the beginning of the season. It finished in thirteenth in GS class. This second MIA team car was however not driven by Randall and Wilden at Canadian Tire Motorsport Park, rather it was lent to be raced by the C360R team.

The following event of the IMSA continental Tire SportsCar Challenge will take place in two weeks, on July 21st at Lime Rock Park, in Connecticut.