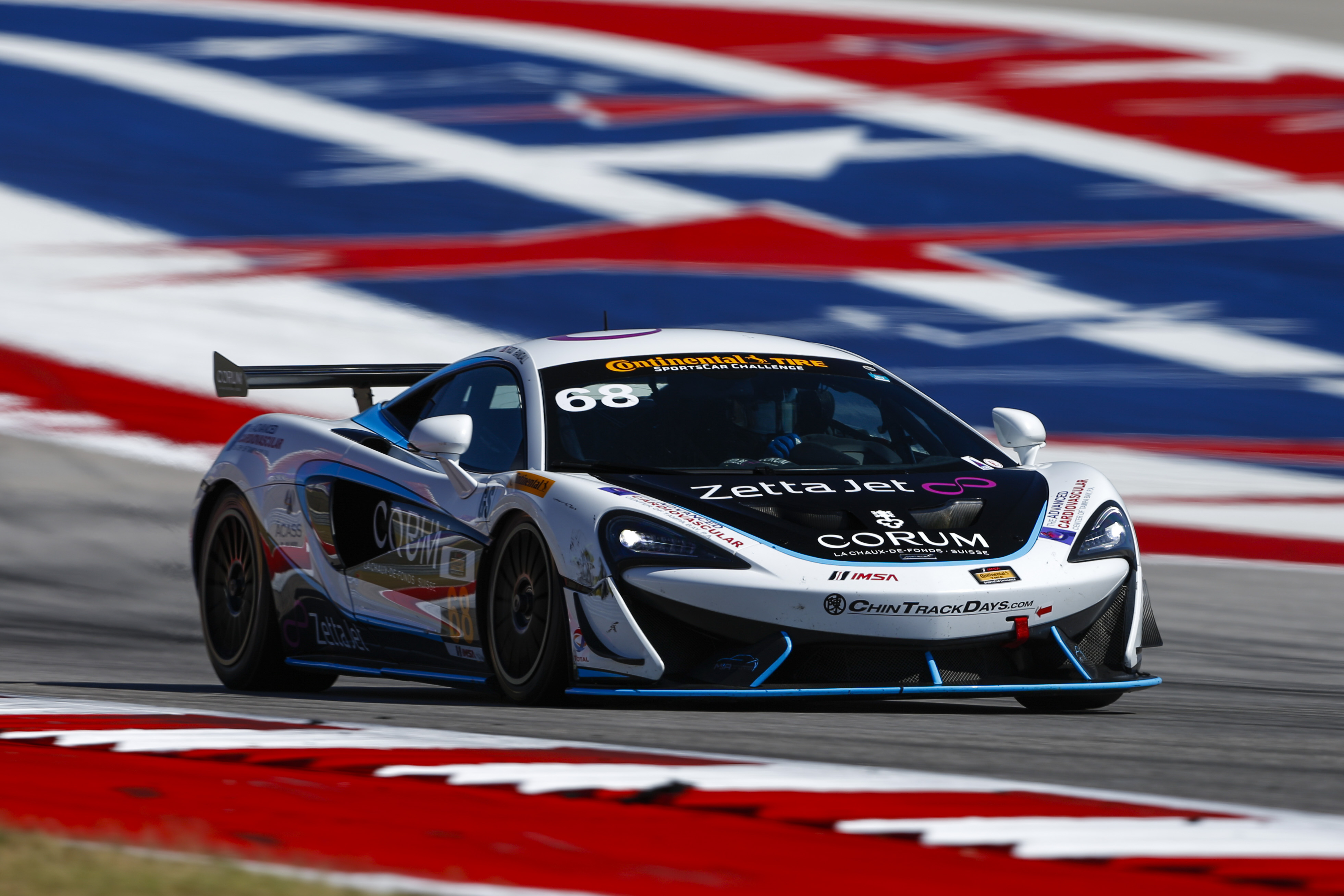 May 6, 2017.- After a very promising start of the season, highlighted by a podium finish at Sebring last March, the Montreal Motorsports In Action (MIA) team experienced a difficult weekend at the Circuit of the Americas in Austin, Texas. Mechanical issues side-lined the McLaren 570S GT4 of Quebeckers’ Chris Green and Jesse Lazare before even starting the race (after they had qualified on the first starting line !), while the team’s other car, Ontarian Kenny Wilden and American Dr Rod Randall, finished tenth.

Arriving to Texas full of confidence for the third round of the IMSA Continental SportsCar Challenge series, members of the MIA team saw mechanical issues plague the #69 car during the practice session. After working on the car Thursday night until 3am Friday to put everything back in order, their efforts were rewarded on Friday as Chris Green placed the Garaga and Pfaff #69 car in second position during qualifying. “The result is even more satisfying because Chris has never before driven on this track prior to this weekend, and with the previous night’s problems, he only had eleven laps to learn it » indicated Eric Kerub, the team owner, who added: « actually, Chris could’ve even earned pole position because he was a little hesitant in his fastest lap, which cost him several tenths, essentially the gap between pole position and second place”.

The following day, the efforts put forth by Jesse Lazare, Chris Green, and the entire MIA team were for naught as an oil leak was detected on the pre-grid, followed by a small fire that was quickly contained. This forced the team to retire the car before the start of the race. « Obviously it’s disappointing because we really were very fast but we’re consoling ourselves with the fact that it’s only the third race of the season in a championship of ten. Everything in the title hunt is still possible » commented Eric Kerub.

The MIA team’s #68 “The Advanced Cardiovascular Center of Tampay Bay” McLaren 570S GT4 of Rod Randall and Kenny Wilden had a much less chaotic race. Qualifying in thirteenth, they had a good start to the race, before giving up a lap. The team attempted a courageous but unsuccessful strategy during a caution flag to try to make up the lost lap. They nevertheless had a perfect finish, crossing the line in tenth place, first among the drivers that were one lap behind the American leaders of Holton and Plumb, in a McLaren of the C360R. “Congratulations to all the members of the C360R team who, for the first time, brought a McLaren to victory in this series” explained Eric Kerub at the finish of the two-hour race.

Despite just one “Top 10”, both cars entered by the MIA Team demonstrated an excellent level of performance in Austin. The Montreal team is eager to put this weekend aside and concentrate on the next round of the IMSA Continental SportsCar Challenge season. This will take place on June 30th and July 1st at the circuit of Watkins Glen, in the state of New York.