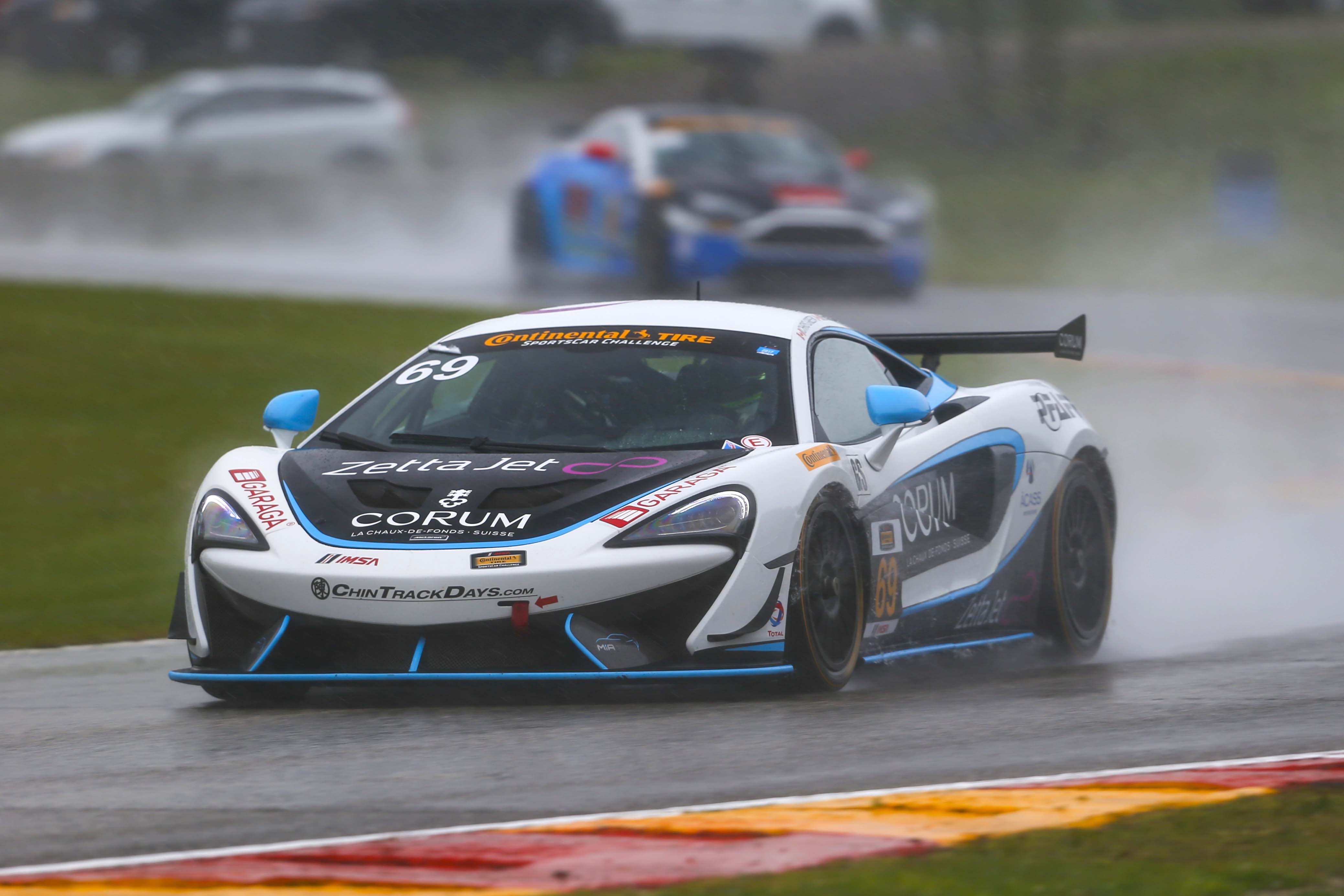 August 6, 2017.- Once again this season, Montreal drivers Jesse Lazare and Chris Green earned a podium spot in the North American Endurance series IMSA Continental Tire SportsCar Challenge, after finishing in third place this weekend on the Road America track in Elkhart, Wisconsin. At the wheel of their Quebec-based Motorsports In Action (MIA) McLaren 570S GT4, Lazare and Green were among the leaders from the start right until the finish of a race that was cut short because of a downpour, two-thirds of the way through the scheduled two-hour duration.

On the long (4 miles) and fast Road America track, the MIA team shined as Jesse Lazare and Chris Green were consistently in the Top 5 during the practice session, qualifying, and the actual race. At the wheel of the #69 McLaren MIA, Chris Green started the race in fifth place. With slick tires and a track that was still wet from rain showers just prior to the start, Chris answered the challenge by keeping the car in the lead pack.
As more laps passed, the track eventually dried and the front six cars separated themselves from the rest, providing a magnificent first half hour for all the spectators on hand to witness. At one point, Chris Green was in sixth place, and within three laps, he had climbed to third, before dropping one position by the end of the first hour of racing when the MIA team entered the pits for a driver change, new tires, and fuel.

The strategy was a good one and Jesse Lazare retook to the track equipped to do battle for victory during the second half of the race. Unfortunately, just a few laps later, a caution period took place and before racing could recommence, a fierce downpour flooded the track. Race officials subsequently decided to call the race. With the storm lasting longer than anticipated, and the race ending early, Jesse Lazare, Chris Green and the MIA team’s #69 McLaren officially finished in third place.

“I am pleased that our team earned another podium but I would’ve preferred achieving it another way !” indicated MIA team owner Eric Kerub. He added : “we were in a good position to win the race, and right now, the disappointment of not getting to finish it is still very fresh on my mind. Chris hadn’t driven at Elkhart Lake in 16 years and he was fighting with the leaders. Once Jesse got in the car, he had a real chance at winning”. Naturally, it’s impossible to know whether Jesse Lazare would’ve been able to succeed had the race restarted, but one thing is certain, he had what was needed to do it.

The MIA team had also entered the #68 McLaren in this event, driven by Ontarian Kenny Wilden and American Rod Randall. The duo, who returned to competition after promising results early in the season, finished in tenth place in GS Class, one lap behind the leaders.
The next outing for the MIA team and the IMSA Continental Tire SportsCar Challenge series will take place in three weeks, on August 25-26 at the Virginia International Raceway, in Virginia. This will be the eighth of ten races that make up the 2017 season.