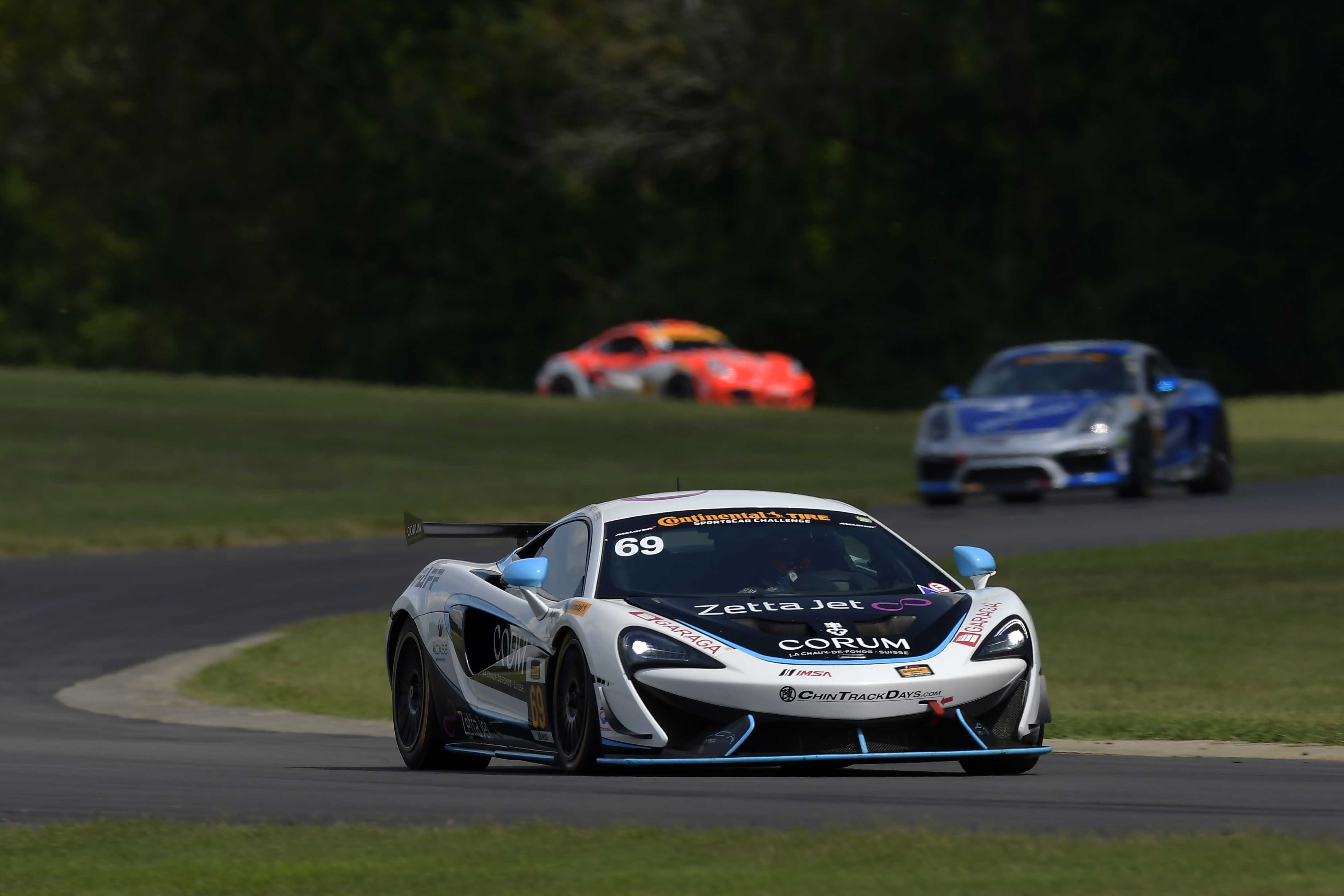 August 26, 2017.-Quebec’s Motorsports In Action (MIA) team and its Montreal drivers Jesse Lazare and Chris Green, earned another Top 5 finish this weekend in the North American endurance IMSA Continental Tire SportsCar Challenge series, upon completing the two-hour race presented at the Virginia International Raceway. At the wheel of their McLaren 570S GT4, Lazare and Green progressed among the leaders throughout the duration of the race and could’ve finished even higher than their fifth place ranking had it not been for caution periods interfering with their pit-stop strategy.

After qualifying their Corum and Zetta Jet McLaren in fourth place, Jesse Lazare and Chris Green were eyeing another podium during this eighth of ten races in the 2017 season. After the start, Green maintained his position before entering the pits for a brief refuel after only thirty minutes of racing. The MIA team had calculated that on this track, the GS class cars would not be able to contest the entire race with only one refuelling stop. The Quebec team therefore decided to schedule a pit stop early in the race, without switching drivers.

Restarting in twelfth, Green gained positions as the laps passed and by the midway mark of the race, he was back among the leaders. This coincided with a long caution period following an incident in the peloton. Everybody entered the pits, including the MIA McLaren for its second refuelling, which took longer than anticipated as a result of a stuck lug nut. For Green, this was also time to relinquish the driver’s seat to his teammate Jesse Lazare.

The team’s strategy, which could’ve played out brilliantly, did not work in their favour as a second caution period took place shortly after the restart, to the point that once the race got started again, less than thirty minutes remained as the green flag waved off a peloton of the thirty-two competitors.

From that point on, everyone knew that it was possible to finish the race with only one refuel and, for Jesse Lazare, all he could do was hope to stay in the Top 5. The young Montreal driver completed his mission without problem, crossing the finish line less than ten seconds behind the leaders.

“We took a chance that this would be a race without too many incidents, and that was true. However, the caution periods were long and that gave our rivals exactly what they needed to complete the race with only one refuel. As a result, our gamble on two stops played against us” confided team owner, Eric Kerub. “At the same time, our problem with the wheel nut cost us the most. We can’t blame anyone for it and I think that given the circumstances, we’re satisfied with finishing in fifth place” he added.

The MIA team also entered the #68 Corum, Zetta Jet and “The Advanced Cardiovascular Center of Tampa Bay McLaren in this event with Ontarian driver Kenny Wilden and American Rod Randall were at the wheel. Qualifying in twelfth, they unfortunately had to retire due to mechanical issues with fifteen laps to go.

The next round of the 2017 IMSA Continental Tire SportsCar Challenge series will take place in four weeks in California, on September 22nd – 23rd on the Laguna Seca track near Monterey. This will be the penultimate round of the season.