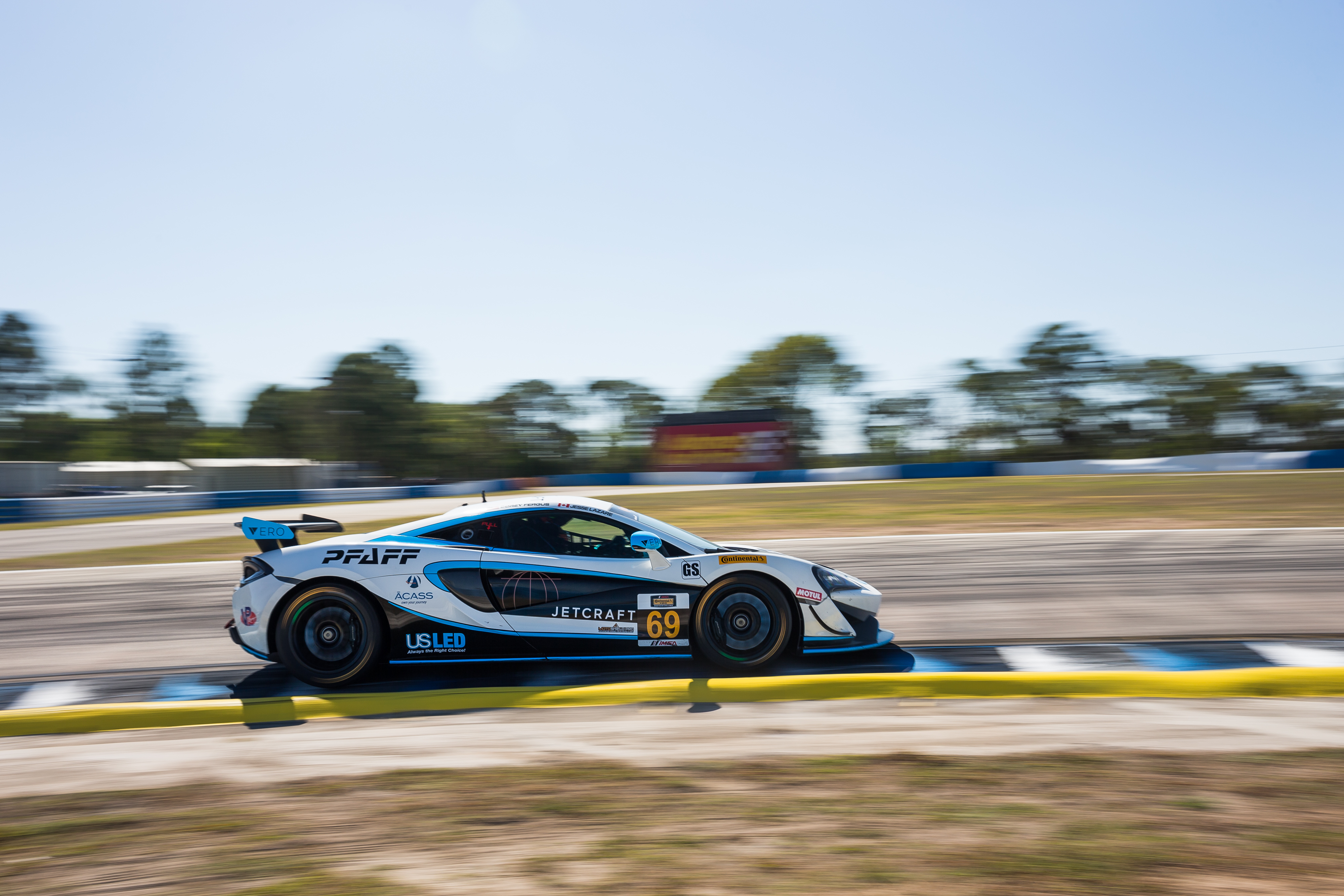 Sebring, Florida. March 18, 2018 – The first 2-hour endurance race of the Continental Tire SportsCar Challenge was held at Sebring International Raceway on Friday, March 16. An action- packed race which could have yielded a podium for Motorsports in Action resulted in foregoing the race twenty minutes before the end, misrepresenting the team’s efforts.

Indeed, after the official testing at Sebring two weeks ago, the team had prepared the McLaren 570s GT4 for victory this Friday. The car had proven itself to be outstanding during the qualifying rounds on Thursday afternoon, allowing American Corey Fergus to set an impressive 4th position.

Starting from the second row for the main event, Corey Fergus maintained a top position from the start and eventually made his way to first place with great racing maneuvers’ and a strategy optimized for our pro/pro combination of drivers.

After one hour in the race, it was Montrealer Jesse Lazare’s turn to go out in the #69 car. Coming back on the track in the middle of the pack with several teams still needing to do their pit stop, a yellow flag with 51 minutes remaining changed the team’s strategy, opting for a quick refueling in the pits.

Back on track, Jesse Lazare was vying for a podium until his race came to an abrupt end. A competitor made contact with Lazare’s McLaren at corner #13, causing the #69 machine to run off the track.

Managing a quick recovery and joining the tail-end of the pack, moments later, the car’s right rear wheel was coming apart due to the initial damage initiated by the contact, preventing Jesse from returning safely to the pits.

Consequently, a disappointing weekend although productive as to time on track and performance wise. Notwithstanding these results, the team managed to surmount the problems encountered at Daytona.

The race will be broadcast on Sunday March 25 at 10:30 a.m. on Fox Sport 1. The next IMSA Continental SportsCar Challenge race is scheduled at the Mid-Ohio Sports Car Course May 4th to 6th. Columbus, Ohio-born Corey Fergus will have the opportunity to race at his hometrack in front his fans.

Jesse Lazare, driver of car #69: “Corey did an outstanding first stint, bringing the car in first place. When I got in, the car was understeering a little bit, but it was turning into a neutral car and it was going to be really good at the end. Unfortunately I was taken out by one of the other drivers that caused damage to the point of not being able to continue. I am just going to fight harder next time to make sure I get back to the front.”

Corey Fergus, driver of car #69: “ I had a really good stint out there. I had the opportunity to lead the race, which was exciting, and we had a pretty good car over the long run. It seemed that when other cars were falling off, we were improving which put us in a good position at the end of the stint. Unfortunately, some things are out of your control and Jesse was doing a great job and he was just taken out which put us out of the race. We just have to move on and go to Mid-Ohio which is my home track and I am really excited about racing there. I think we can get on the podium.”

Motorsports In Action is pleased to welcome new partner Vero for the 2018 IMSA Continental Tire SportsCar Challenge season. Vero is a new social network that represents our search for a more honest and more useful social experience – one that complements our lives instead of detracting from them. It is an app where there is no advertising; brands earn their following through consistently good content, and they don’t have to pay to reach users.

This partnership with Motorsports In Action is more than just about racing. The team wants to introduce this new social network and promote it as the next big app. MIA will showcase never-before-seen content on the app. Curious about where our drivers eat before a race? Want to know which music they listen to before going on the track? Sharing is easy, users can share their favorite spot with unique pictures and recommendations, or what they are listening or watching. Vero lets you have a true social relationship between users.

Vero believes, the greatest social network is the one that already exists between people. Our mission it to make it available online.

No Ads, No Algorithms, No Bots, No Data-mining.
We believe privacy is a right not a setting, so we’ve put control back in the hands of the user.

You own your own content, forever. You can build an audience, and reach your entire audience without being continually charged for it.
Quite simply, we support people and their passions in a way that’s truly social.

For over 55 years, Jetcraft has seen clients returning to them because of the unique services they offer

in business aviation. Their industry leading market research and capabilities and experts in sales, marketing and deal management guarantee the client’s access to the support needed for a smooth transaction. Experience the efficiency, flexible purchasing options and extensive inventory that have made Jetcraft a leader in the industry.

From selling to buying aircraft, to your asset management, commercial aircrafts, fleet planning and custom fulfillment, Jetcraft is a leader in its field. With the knowledge of their professional team, clients will always find the best solutions for their needs. Motorsposrts In Action is delighted to welcome this new partner to the 2018 season.