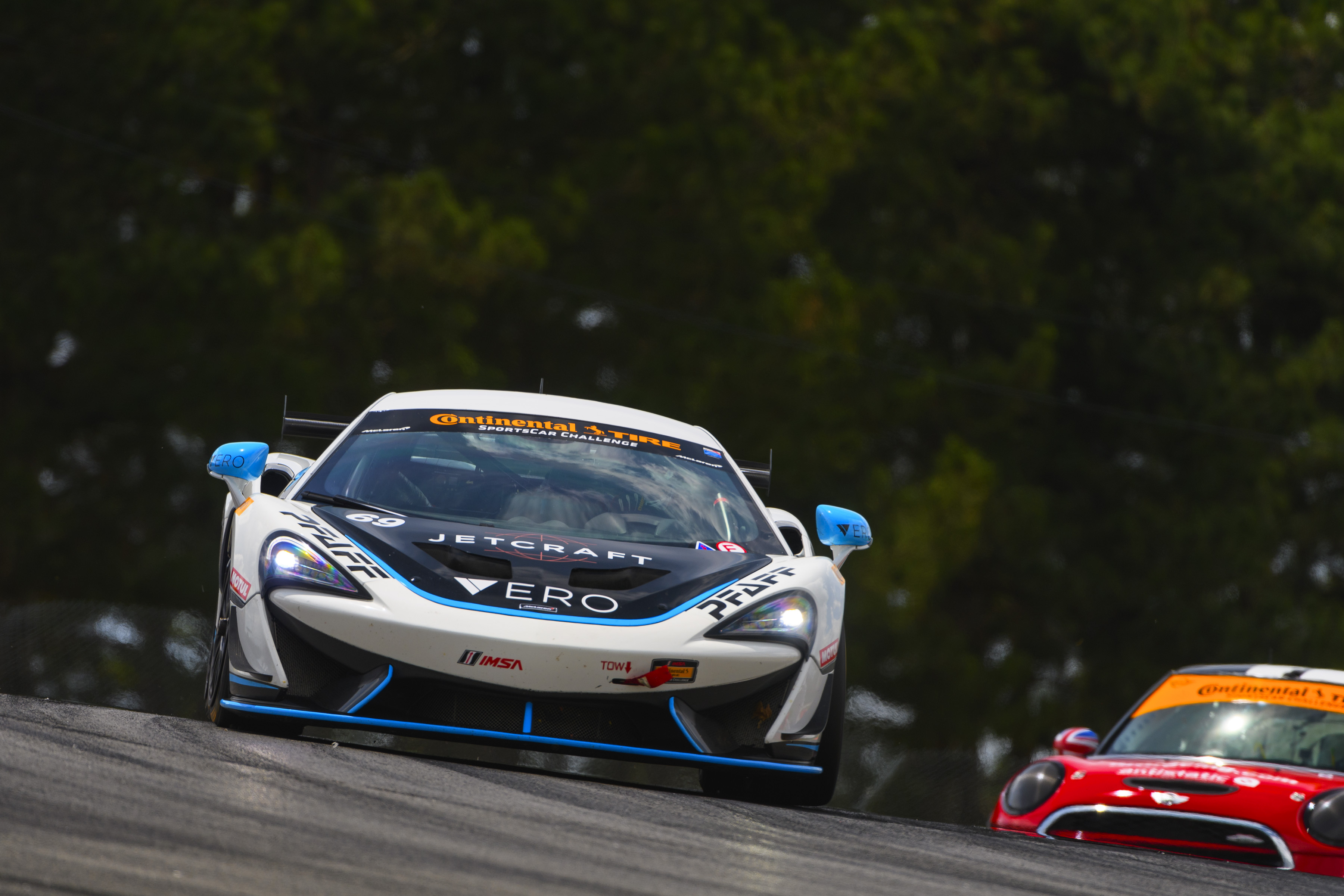 Lexington,Ohio. May 7th2018 – Motorsports in Action’s efforts were not conclusive during the Mid-Ohio 120, a 2-hour endurance race at the Mid-Ohio Sports Car Course in the IMSA Continental Tire SportsCar Challenge.

Corey and John Fergus, both Columbus (Ohio) natives, were honored during Saturday’s Fan Walk. A picture of three father and son duos was taken to commemorate the dad’s participation at Mid-Ohio in the Grand-Am days, and the son’s involvement in the Continental Tire SportsCar Challenge.

The McLaren 570s GT4 racing in the Grand Sport Class (GS) proved to be reliable and fast all weekend thanks to a strong team effort. Unfortunately, MIA’s luck did not hold up as Saturday turned out to be a busy and hectic day for the team.

During qualifying, which took place Saturday morning just 3 hours before the race, Jesse Lazare’s flying lap was interrupted by a red flag. Back in the pits, the team and half of the field lined-up near the pit exit, which is against IMSA regulations. Jesse and most of the pack had to serve a drive-through penalty after the restart, which gave him only one chance at clocking a good time and could not make the most of it qualifying an uncharacteristic P8 .

After qualifying, the crew noticed an oil leak back at the garage. Even though the team worked hard throughout the lunch break, ultimately the car was 1 minute late to the false grid, sending the #69 machine to the back of the GS field.

Jesse Lazare started the race last in the GS class but lost no time at all and went from the last place to P3 before the end of his impressive stint. When Lazare came back to the pits for the driver change, there was a miscommunication and Corey Fergus left with the fuel fill rig still attached to the car. Although he did not leave the pit box, the team received a drive-through penalty.

Corey came back in the Top 10, defending his position from the BMW M4 GT4 of Greg Liefooghe (Stephen Cameron Racing). Considering the race did not go as planned, the team strategy changed and with 5 minutes left to go, there was no more fuel in the car. Corey managed to get back in the pits for a quick “splash and go”. Motorsports in Action finished this 2-hour race P13.

Corey Fergus– Driver of car #69: “Another unlucky day for us. I know we have a great car and things are finally starting to come together for us and I think we are learning a lot but we can’t seem to piece it together, whether it’s an issue with the car or running out of fuel, we just keep getting unlucky. Once we get that in check I think we will be good. I think our time is coming, I think we are due for a podium finish so I wouldn’t be surprised for the rest of the season if we can grab a few podiums. We have a lot to learn still and we need to regroup and figure out what we can improve on, but I think we are going to be in OK shape at Watkins Glen.”

Jesse Lazare– Driver of car #69: “We had a good car all weekend and a series of unfortunate events contributed to us not getting a podium. We know what to fix and we will be back in great shape at Watkins Glen.  I would like to thank the team for its amazing work this weekend and I look forward to be back in the car soon.”

Eric Kerub– Team Owner: “Another disappointing weekend for the MIA team. After a strong private test at the Mid-Ohio track only a couple of weeks before the race, we were confident of our pace and setup. Of course, we didn’t have a reference on our competitors, but the car felt great according to our drivers. The weekend started uneventful and as per our planned program. Unfortunately, a combination of mistakes were made internally which seemed to snowball into the race. The drivers did great and the pit crew as usual were flawless, but we need to be much better on how we manage certain processes within the team.  We had a realistic shot at a podium based on several factors, but we made mistakes which eliminated any potential result worth celebrating. Running out of fuel with 4 minutes to go will not be soon forgotten and we will all reset and come out stronger for our 4-hour race in Watkins Glen come June!”