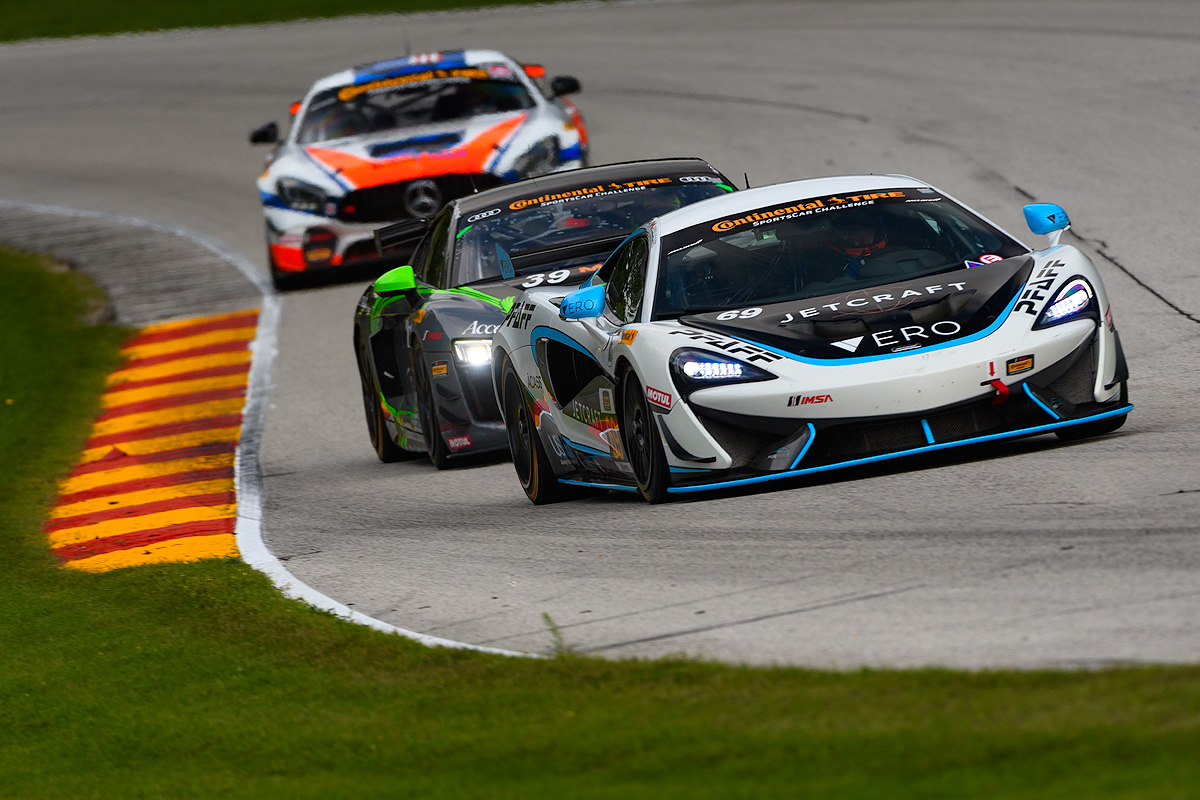 Elkhart Lake(WI), August 5, 2018 – Motorsports In Action and its #69 McLaren 570s GT4finished in fifth place during the Road America 120in the IMSA Continental Tire SportsCar Challenge at Road America (WI) this past Saturday.

Columbus’ Corey Fergus and Montréal’ Jesse Lazare claimed their first Top 5 finish of the season at the picturesque four-mile track in the Kettle Moraine region of Wisconsin. The team was off to a promising start as Friday’s practice sessions saw Jesse and Corey clocking in the fourth and second fastest times. Saturday, the McLaren dominated the third free practice, scoring the best lap-time.

Qualifying fourth on Saturday morning, Jesse Lazare took the start of this 2-hour endurance. An early caution flag set the tone of this race which was interrupted once again by nerve-racking accident between two competitors.

Gaining advantage of this neutralization, Motorsports In Action’s #69 car came back in the pits for a fresh set of tires, fuel and a driver change. Now with Corey behind the wheel of the Pfaff | Vero | Jetcraft | US Led ltd | ATC Trailers McLaren, the remainder of the race was on a green flag.

Corey Fergus had some spirited fights on the track, trying his best to put the McLaren 570s GT4 on the podium.

As Fergus was running third, closing in on the second car with flying laps, the team was hoping for a yellow flag to come out as they were two laps short on fuel. A few incidents occurred, but nothing significant enough to stop the race. The McLaren was forced to come in the pits for a “splash and go” two laps before the end of the race. While leaving the pits, Corey Fergus was able to beat Kyle Marcelli’s Mustang who was also pitting and consequently gain a position.

Although the crew’s stellar work during pit stops and between the sessions was remarkable, this fifth place is not significant of the team’s potential. Motorsports In Action remains on the hunt for a first podium finish at the next IMSA event on August 18 at the Virginia International Raceway (ViR).

Eric Kerub, Team Owner: “With some much-needed help which we finally received from IMSA in the BoP department, we had high expectations coming into Road America which rewarded us with a podium last year. The weekend was looking very promising until qualifying which showed we were not the fastest in the field.

However, we still had a competitive car with two great drivers and an incredible pit crew so a podium and potential win was our goal. Of course things didn’t play out perfectly to our advantage but we made the most with what we had and I’m very proud of our 5th place considering our difficult first half of the season.”

Corey Fergus, driver of car #69: “We had a much better weekend here at Road America. We had a lot of potential; the team did an amazing job during our pit stop. Jesse and I had a great driver change, and we showed a lot of promise working our way back up in the field. Unfortunately, when we got into third, we were running out of fuel, and we had to make a pit stop to finish the race and ultimately it led to a fifth-place finish. It’s unfortunate because of how hard we all worked to get back into the paddock here. It doesn’t show the potential that we had, but I think we showed everybody we had pace and we were here to win but things didn’t go our way. too bad because it is such a good car.”

Jesse Lazare, driver of car #69: “During Saturday’s race we looked very consistent; we were great on tires and we were putting in faster laps than the leaders. Unfortunately, a caution flag came out where it gave the cars a better chance to make it until the end on fuel consumption and we can’t.  That’s what hurt us a little bit at the end. But at the end of the day, we had the car to win this race in a lot of different scenarios.”