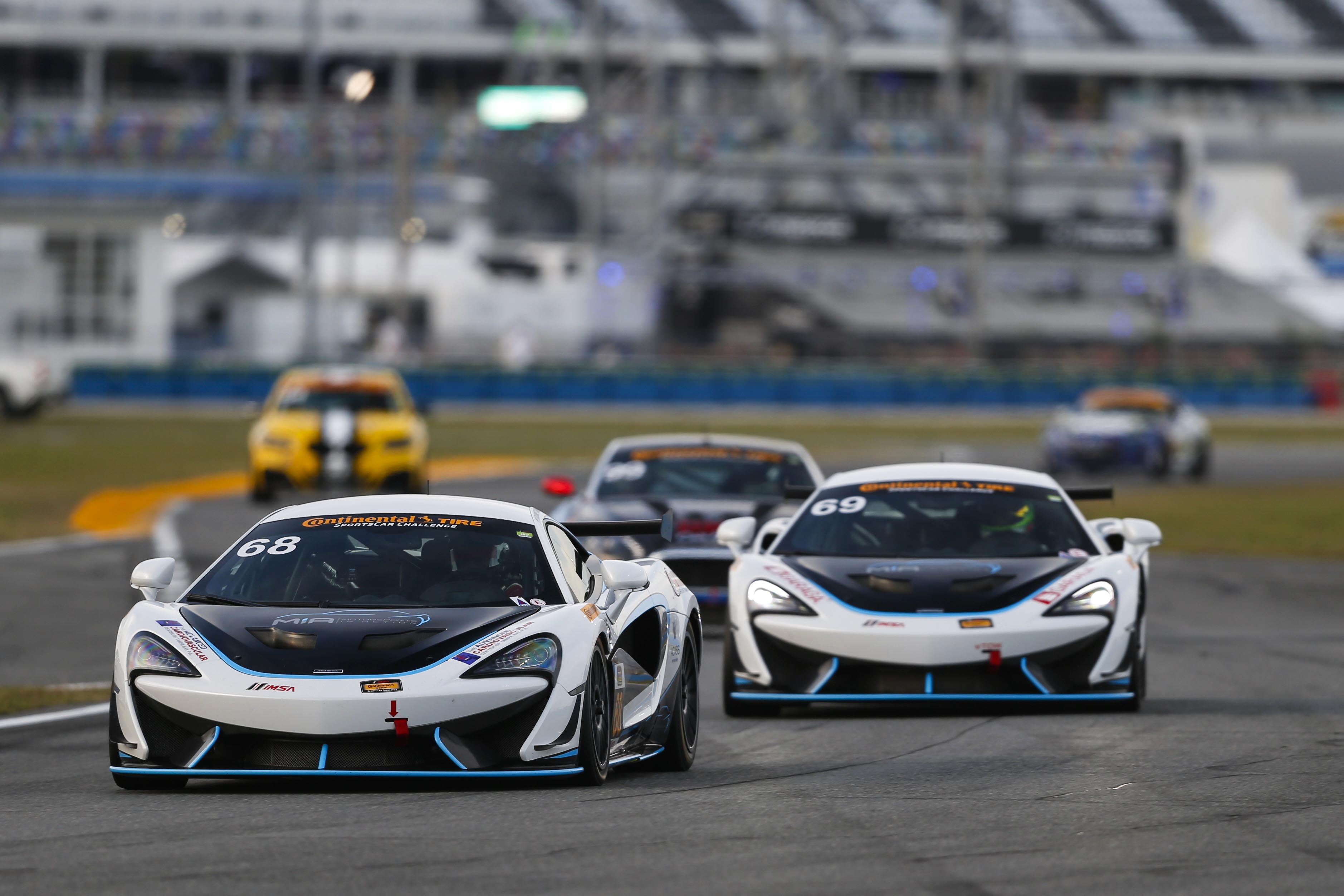 Montreal, Quebec, Canada, January 28, 2017 – The Motorsports In Action (MIA) Team took to Florida’s Daytona Beach track yesterday to contest the first round of the 2017 endurance IMSA Continental Tire SportsCar Challenge. This four-hour event launched the season, and saw the MIA Team’s two McLarens realize a very promising start. At the wheel of the #69 McLaren 570S GT4, Montreal drivers Chris Green and Jesse Lazare were among the leaders until a small hit resulted in mechanical problems that ended their hopes with only half an hour remaining, as Lazare was battling for victory. In the #68, Ontarian Kenny Wilden and American teammate Rodney Randall had better luck, finishing the event in ninth place.

For the MIA Team, entirely Montrealers and brought together by owner and veteran driver Eric Kerub, this first event of the season marked the team’s grand debut in North American endurance. It was full of emotions but undoubtedly confirmed the competitiveness of the two McLarens.

In a practice session that included the forty entries, the #69 Garaga and Pfaff car, driven by Chris Green and Jesse Lazare, made its way into the top 10. Kenny Wilden and Rodney Randall also had a great start to the weekend, making it to third place in the second practice session, despite still learning the car. During qualifying, Wilden brought the #68 “The Advanced Cardiovascular Center of Tampay Bay” car to the third starting row, while Green found himself in the fifth.

During the race, Kenny Wilden and Chris Green quickly found a good rhythm before handing the wheels off to their respective teammates, while both cars were sitting in the top 8. In car #69, the young Jesse Lazare, winner of last year’s American Porsche GT3 Cup, had a fantastic stint as he climbed his way up to a fighting position for the lead. Lazare was in third place when, less than an hour to the finish, he came into contact with one of the two adversaries with which he was battling, forcing him to enter the pits with a broken radiator. All hopes of winning were lost and, so as not to damage the engine, Lazare had to accept an early end to the race shortly after he retook the track. The car #69 is classified 13th in GS class, 27th overall.

In car #68, following Rodney Randall’s successful and incident-free shift in a car he was still getting familiar with, Kenny Wilden retook the wheel for the last section of the race. In a battle to break the top 5, and after getting caught up by tricky traffic caused by the slower cars, Wilden finished the race in ninth place overall. This result was very encouraging for Wilden, Randall, and the MIA Team’s McLaren.

For owner Eric Kerub, this initial outing was intense but it highlighted the competitiveness of the entire team : “Sure, our inexperience meant we made a few mistakes during the changeovers in the pits that probably cost us a few seconds but we challenged for the podium with both cars and that’s excellent” he indicated.  “Jesse came into contact with one of his competitors close to the end, which meant pulling car #69 but that’s part of racing. He tried to regain his place, he fought for it and that’s great. Jesse takes full blame in going for a pass that could have been attempted later with more room to maneuver. However, I’m happy that he pushed to go for the win, but also I believe we should never cause avoidable collisions with a competitor. But overall, I’m proud of all of the drivers’ skills and I now know that we’re a team that can win. We’ll analyze all the data from Daytona and work with McLaren to do even better at the next race in Sebring” he concluded.

Victory went to the Porsche Cayman of the American duo Trent Hindman/Cameron Cassels. The next round of the Continental Tire SportsCar Challenge is set for mid-March, as part of the 12 Hours of Sebring, also in Florida.

Since 2002, Motorsports In Action has been building race cars for various local and international series, acquiring a wealth of knowledge and resources along the way. Our race shop is well known for high-end mechanics, exotic automotive maintenance, complete race car building and design, prestige paint, and meticulous detailing.
www.motorsportsinaction.com

About The Advanced Cardiovascular Center of Tampa Bay, P.A.

Located in the Tampa Medical Tower, 2727 W. MLK Blvd. Suite 418, Tampa, FL, 33607, The Advanced Cardiovascular Center of Tampa Bay is a specialty practice with goals to provide the best, most appropriate, and efficient cardiovascular care.
www.advancedcardio.com

About The Autodrome Saint-Eustache

Autodrome St-Eustache is a multi-purpose motorsport venue serving the Greater Montreal market. Established in 1964, the racetrack is the oldest active motorsport property in the province of Quebec. Considered one of the most popular racetracks in Canada, the Autodrome hosts more than 100 races every season, including national championship races as the exclusive NASCAR home track in Quebec. It also serves as the exclusive Canadian host of the Formula Drift Pro Championship. An on-site automotive techno park featuring specialty speed and machine shops provides high-end performance and restoration services for demanding customers worldwide.
www.autodrome.ca