Crew chief Carl Hermez hand-picked the MIA race team for its IMSA campaign based on talent, racing experience, work ethic, and determination to reach the highest levels of the sport.

Universally respected Quebec pro-driver and two-time Rolex 24H Daytona Champion Jean-François Dumoulin will lend his formidable racing experience throughout the season, advising and supporting MIA in all facets of its championship effort.

According to Kerub—whose own hands-on racing experience extends back 20 years, and relationship with McLaren dates back to the early 80’s—-the MIA team was built with nothing less than an IMSA championship in mind.

“I truly believe I have the best driving combo in the field,” said Kerub. “These are two top pro drivers, with excellent pedigrees. They’ve gotten to the top in whatever they’ve driven.”

Lazare is coming off a dominating 2016 IMSA Porsche GT3 Cup Challenge USA season, capturing the championship title with 12 wins and 14 podiums in 16 races. At only 19 years old, with already six championship titles, Lazare is considered by peers and experts alike to be one of the sport’s most promising up-and-comers.

Green, 32, has been racing for nearly two decades, racking up five championships, 16 race wins, 40 podiums, and the 2015 IMSA Porsche GT3 Cup Challenge Canada title in the process. Green’s experience, including a 67 percent race to podium percentage, makes him the perfect partner to young Lazare. Green is also the McLaren Brand Manager for Pfaff Automotive Partners, the Canadian importer of McLaren automobiles.

Kerub said it took a lot of convincing to get two recently crowned IMSA championship drivers to join a brand new team, driving a brand new, unproven car, McLaren’s championship legacy notwithstanding. But, Green’s faith in McLaren, Lazare’s hunger for new challenges, and all the pieces Kerub put in place for a championship team ultimately won the day.

“Teaming up with MIA in the Continental series is essentially a personal and professional opportunity trifecta,” Green said. “It’s a chance to represent the McLaren brand for Pfaff Automotive, race in an ultra-competitive environment, and work with a group of guys I couldn’t have more respect for, all at the same time.”

“I’m excited to be racing with teammates who all share the motivation and ability to win,” Lazare concurred. “I always work very well with Chris and I’m grateful to Garaga, Pfaff, and Eric for putting together a great team I definitely believe will be in the race for the title.”

The team’s test facility and 20,000-sq.-ft. professional race shop is located at the Autodrome Saint-Eustache motor sport complex in Saint-Eustache, Quebec. With a 1.78 km road course, it offers the team unfettered flexibility in training, testing, and development.

Of course, anyone who follows racing can recall storybook teams that failed to live up to their potential. Great teams on paper have not always proven great on the track. The MIA team says they are mindful of this, but confident in their ability to deliver.

“I don’t have any delusions of grandeur,” Kerub said. “I understand there are a lot of things we have to learn and navigate. But this isn’t a building year. We’re here to win.”

Since 2002, Motorsports In Action has been building race cars for various local and international series, acquiring a wealth of knowledge and resources along the way. Our race shop is well known for high-end mechanics, exotic automotive maintenance, complete race car building and design, prestige paint, and meticulous detailing.

About The Autodrome Saint-Eustache

Autodrome St-Eustache is a multi-purpose motorsport venue serving the Greater Montreal market. Established in 1964, the racetrack is the oldest active motorsport property in the province of Quebec. Considered one of the most popular racetracks in Canada, the Autodrome hosts more than 100 races every season, including national championship races as the exclusive NASCAR home track in Quebec. It also serves as the exclusive Canadian host of the Formula Drift Pro Championship. An on-site automotive techno park featuring specialty speed and machine shops provides high-end performance and restoration services for demanding customers worldwide. www.autodrome.ca

Click here for more photos of the McLaren 570S GT. 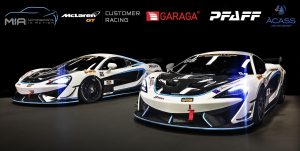