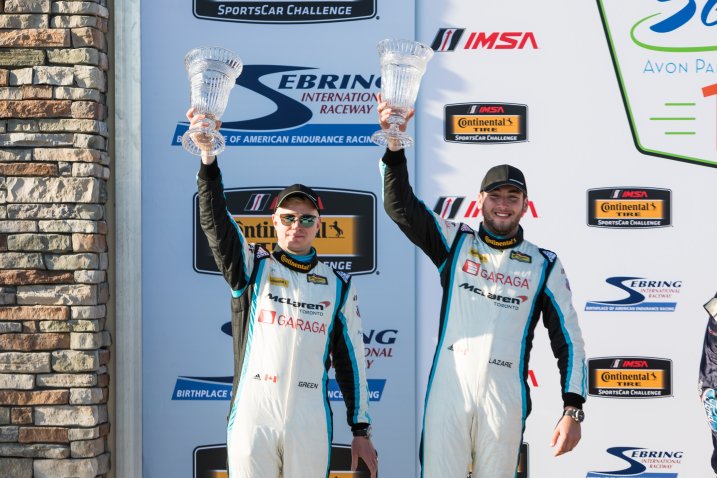 Montreal, Quebec, Canada, March 17, 2017 – Montreal drivers Jesse Lazare and Chris Green gave the Motorsports In Action (MIA) team its first IMSA Continental Tire SportsCar Challenge series podium this week, on the Sebring track in Florida.  This was the St-Eustache, Quebec team’s second race in this highly competitive Endurance series and the Lazare/Green duo was continuously in the Top 6 throughout the event.  They led the race for several minutes before eventually finishing in second place.  In the MIA team’s other McLaren 570S GT4, Ontarian Kenny Wilden and American Dr. Rod Randall finished in eighth.

After a promising test two weeks ago on the famous track in central Florida, all members of the MIA team headed into this outing with confidence.  This was reaffirmed during the practice session, when the Canadian team’s two McLarens were amongst the fastest.  In qualifying, the Corum Watches / Zetta Jet / Garaga / Pfaff #69 car of Lazare and Green found themselves on the second starting line, while Wilden and Randall’s #68 “The Advanced Cardiovascular Center of Tampa Bay” car qualified on the fifth.

At the start of the two hour race, Chris Green made his way to second place as of the first few corners, before losing one spot and ending his shift in third place.  This coincided with a long neutral period after just under an hour of racing.  Taking position behind the wheel, Jesse Lazare, winner of January’s 24 Hours of Daytona, demonstrated his talent once again as he climbed his way to the lead, forty minutes before the finish.

The MIA team brought Jesse into the pits shortly thereafter, to ensure he wouldn’t run out of fuel prior to the finish of the race. However, another neutral period took place twenty-five minutes before the finish, thereby complicating Lazare’s plans, as he sat in third place when the race restarted, only ten minutes prior to the checkered flag.  Jesse still managed to gain one spot in the last lap, to eventually finish second, less than three seconds behind the winner.

In the #68 car, Dr. Rod Randall had a promising start of the race, before handing the wheel over to Kenny Wilden. Sitting in the Top 6 for a long time, and even in second place behind Lazare at one point, Wilden then had a small contact with another car, dropping him several spots. The Wilden/Randall duo finished in eighth place.

For the team’s owner, Eric Kerub, the summary of their second team outing is an excellent one. Both of the MIA team’s McLaren 570S GT4s occupied the first and second spots in the 50th minute of racing and they were all rewarded for their efforts with a podium finish.

Victory was earned by Scott Maxwell and Jade Buford’s Ford Mustang. The next round of the IMSA Continental Tire SportsCar Challenge series will take place at the Circuit of the Americas (COTA), in Austin, Texas, on May 5th.